Friends of BJP can subscribe of daily updates on sub@friendsofbjp.org or via SMS 4BJP to 575758.

BJP has recently thought of many ways to get support of educated people and start a discussion with them. This is very encouraging sign as political parties do not try to face educated people for vote. Educated people can help country by becoming a part of the Indian policies. It is not essential that one must be PM to help the country. One can be a party activist or simple volunteer to effect the policies of the political parties. They can influence the decision made by political parties. and it will be very fruitful for the Nation. 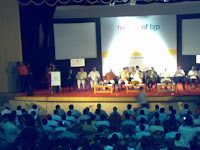