Recent statement by few leaders (bad leaders) that Bihar economic development is not a true story but a hogwash is not true and no one has manipulated the growth story of Bihar.
Here you can see the data present in support of the Bihar development: 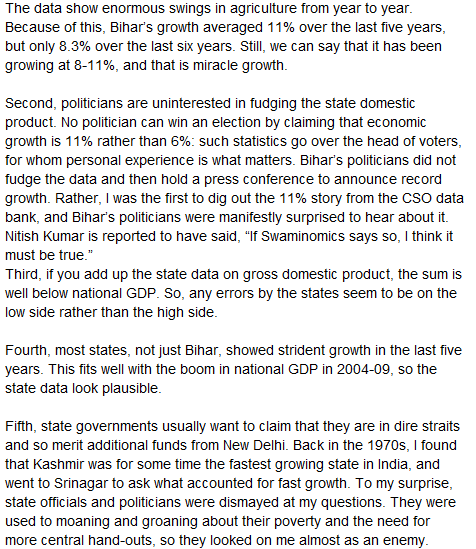 He not only given CSO data but also thought of the leaders nature and natural process of winning election. For example, he tell that no politician can claim to win election on the basis of economic growth. People's personal experience matter much.


In Lalu’s time, swaggering goons showed off their guns in public. Today no gunman is visible. The Nitish administration has convicted 38,000 people, including dozens of politicians, some from the ruling party itself — for violating the Arms Act.

The economic miracle has been led by construction, which has averaged a colossal growth rate of 47% per year for the last five years. Government development spending has zoomed from Rs 2,000 crore to Rs 16,000 crore per year.

Most impressive has been the rise in road construction, from 384 kilometres in 2004-05 to 2,417 kilometers in 2008-09. Security plus road and telecom expansion have incubated a boom in small business and domestic construction.


Are you from Bihar? If yes, then you may like to be a member of this Facebook Group!
Or,
Mr. Anand Kr. (Super 30)


A Glimpse of Changing Bihar