Yesterday I watched movie - Dabangg (or Dabang). I listened it as a masala movie. It is masala but it looked like the movie's release is delayed a lot. It should has been released 20 years back. Lots of things was not perfect. Salman's makeup was the first thing I have not liked. His look was not matching with the environment, the Director was tried to show us. Salman (Chulbul Panday) was looking like a big city or metro boy, whereas the movie was about a village in Uttar Pradesh (UP). Another cast's makeup or style I did not like was Dimple Kapadia - Salman Khan/Chulbul Panday's mother. Her looks was not looking like a big boy's mother. After all this, there is nothing in story. Story should be little meaningful. This movie is Sonakshi Sinha debut movie. So, I expected something meaningful. 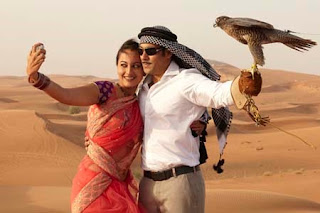 It was not a headache as other cast's acting and style was good. Villain acting was good. Sonakshi Sinha's acting was not targetable. Her dressing was also ok. Police role is society was little different to me. I am telling good or bad about it. It was new and cannot be said not possible. So, it was fine.

Recently, I listen that Salman want some tips from Aamir about publicity. Aamir's movie is generally fit with makeup and sets. He choose these things perfectly and after that he do publicity in his own way.
Malaika Arora's dance is very well suited there and she has done a great job.

According to this post, movie is doing well at box office. It has collected 47 crores in opening weekend.