Mike the Headless Chicken is a story of a chicken who lived long back without its head. His owner has severed his head to kill it but missed the axe a little. The chicken lived between 1945-1947. Chicken after its head severed off lived for 18 months. 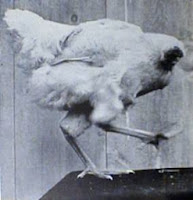 
It was determined that the axe had missed the carotid artery and a clot had prevented Mike from bleeding to death. Although most of his head was severed, most of his brain stem and one ear were left on his body. Since basic functions (breathing, heart-rate, etc.) as well as most of a chicken's reflex actions are controlled by the brain stem, Mike was able to remain quite healthy. This is a good example of central motor generators enabling basic homeostatic functions to be carried out in the absence of the cerebral cortex. http://en.wikipedia.org/wiki/Mike_the_Headless_Chicken