Why BJP or Why Modi?

I received an email in support of BJP and Modi. Here are the content: 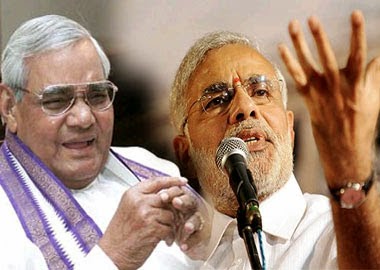 Number of Engineering seats in India increased from 1,34,298 to 3,56,268 during Vajpayee's one term. A phenomenal 165% increase! #IsLiyeBJP #IsLiyeModi

UPA after 2 terms failed to create one state Telangana, on the other Vajpayee's NDA done with 3 new states. #IsLiyeBJP #IsLiyeModi

Just the Golden Quadrilateral that Vajpayee govt built would save Rs.8000 crore of fuel consumption in India, EACH year. #IsLiyeBJP #IsLiyeModi

19, Despite sanctions by so called Developed countries after Pokhran-II,Atalji's govt managed constant rates for the basic commodities. #IsLiyeBJP

b) All villages in Gujarat have 24 hours 3 phase uninterrupted power supply at normal tariff. Gujarat is a power surplus state

a) Introduced GARIB KALYAN MELAS. Benefits worth 10000 Crores have been distributed to 75 lakh beneficiaries through 971 Garib Kalyan Melas.

a) Rs 1700 Crore business handled by 2.5 lakh sakhi mandal that has 26 lakh members (Source: Mission Mangalam Yojana)
b) Crime against women is 0.7% as against 2% nationally

a) In 10 years, Gujarat has constructed more than 6 lakhs water harvesting structures in comparison to just      40,000 structures built in 40 years
b) 75% of Gujarat populations have pipeline/tap connection (nationally, it is just 30%)
c) ONLY STATE in the country to interlink its rivers.

a) More than 40 lakh emergencies attended and saved more than 2.90 lakh lives.
b) 41,057 deliveries have been assisted.
c) It currently responds to between 2000-2200 emergencies on daily basis.
d) 99% of the calls received on 108 are attended in less than one ring which is better than global standards

The email received was from Swati Sharma of BJP.

You are welcome for the comment telling something is wrong or you do not agree etc.
Tags: Election, India, Indian Politics
Newer Post Older Post Home