My Views on Triple Talaq issue after Supreme Court Verdict

Triple Talaq is about separation from marriage under Islam. Under this law, women once said, Talaq three times over phone or whatever way are divorced. Women has no voice on it. Muslim men take every right here. She has not provided any support. She and her children are at the mercy of God.
If men want to marry women again after divorce then she need to marry any other men and then after that she can re-marry the first man. This is called Halala. Generally Maulvi etc used to marry such women and had sex with them and the divorce her to remarry with first man. That could be the reason why mulla and maulvi was supporting the current Triple Talaq system! 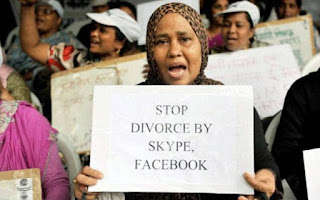 Triple Talaq case is a very old practice in India. The case was hanging from 2015 since Shayara Bano filed case in Supreme Court. Today verdict came after so many turns. Supreme Court even asked govt's opinion on this.

In my view, The Supreme Court Verdict is not fully justified. It is 50-50 kind of verdict.

Maintenance law issue after divorce started in 1985. Then "Secular" Congress overturned rule under pressure from few Muslims. Supreme Court has arranged for maintenance to Muslim women by men in a case.

Hope this will make Love Jihad difficult. As throwing out women after marriage will be difficult now from life.


This is how I reacted to Triple Talaq on Facebook after verdict:


1) Before Supreme Court verdict on Triple Talaq while waiting for the verdict:


#TripleTalaq is a flaring issue in India now. Very much tilted towards Muslim men gives very lower status to Muslim women or women who marry to Muslim men. Can today's verdict by SC stop this injustice to women? Can today's verdict help society towards equality? Salute to Shayara Bano who could fight to this strong societal issue.


Today's coming verdict on #TripleTalaq should help non-Muslim women too! Women who marry to Muslim women are at mercy of "Islamic" TripleTalaq. Before marriage they don't think about it.


When Chief Justice has said then Triple Talaq is valid for now and Govt should make rule on this within six months.


Chief Justice has not delivered justice on #TripleTalaq. It delayed it for many years and now ruling comes as - govt bring rule in this regard in six months.
Govt run by Members of parliament are tied by many things which will act as good and bad catalyst. Opposition roles came into effect in this important issue. Religion and caste politics will make this job very tough for govt.
I say, justice delayed is justice denied. Here it has been denied clearly. SC judges have shown incompetence and their style of hanging victims between dates is clear. Change is required in justice system. Indian justice system should learn from EU and American courts.

Yes, I wanted clear verdict from Court and not this 50-50 verdict.


#tripleTalaq is on hold for six months from Court. By majority (3/5), triple Talaq is illegal. Govt asked to frame law in six months.
But I am unhappy with court's verdict. Case was pending from many years. Yet it is not over. Shame on our justice system.